All eyes on US ahead of presidential election on 3 November

After almost four rather tumultuous years under the presidency of US President Donald J. Trump, voters will once again head to voting centers on 3 November to cast ballots for the next leader of the most powerful nation in the world.

While Republicans will once again be represented by Trump, the Democrats have also chosen to field another familiar face in the country’s political arena namely Joe Biden, the vice-president of the Obama-era. National poll had thus far given Biden a slight lead over Trump but as seen in the previous election, such poll can hardly be conclusive and with such a narrow margin, it will be rather hard to call it for any of the candidates prior to voting day.
The election comes at a time when the country has been ravaged by the Covid-19 pandemic that has killed thousands of Americans. Voting-in-person will be a challenge for some communities and Trump’s refusal to strongly endorse mail-in voting amid fraud concerns could also heighten tension prior to election day. Despite this, a record turnout could still be possible as pointed by Pew Research Centre that said votes cast might reach 145 million, up from 133 million in 2016. Four million people have already voted as of early October, 50 times higher than in 2016, perhaps an indication of the level of interest for this election.

Results are expected to trickle in throughout the night of 3 November and there have been concerns that Trump might refuse to concede if results were too close to call, leading to a stalemate.

Post-election rallies by both sides also should not be ruled out as seen in 2016 following Trump’s victory and the deep divisions over various issues since he took over could also aggravate tension in some communities, days or weeks after voting day. The violent protests experienced throughout summer could once again be reignited while right-wing groups might also exploit the situation to voice out their support for Trump. Clashes between groups are not impossible, leading to looting and rioting especially in big cities. 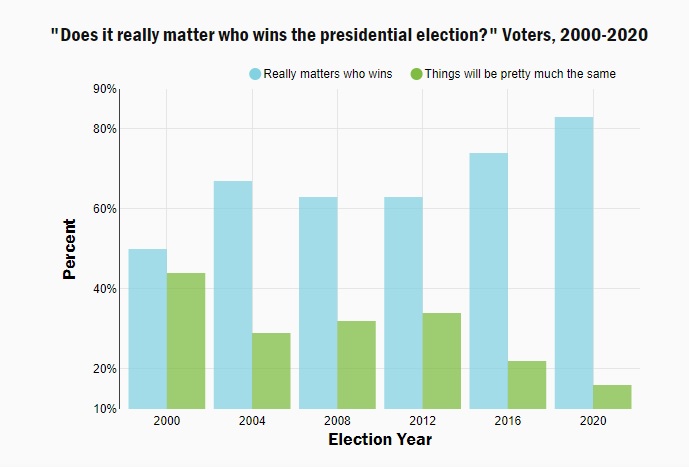 The 2020 race to the White House has become the most highly anticipated election since 2004 (Source: Pew Research Center)

Nagorno-Karabakh: Implications of a frozen conflict that heats up

On 27 September, major clashes between Azerbaijan and Armenian military forces took place along the Line of Contact in Nagorno-Karabakh, an enclave predominantly inhabited by ethnic Armenians in Azerbaijan. Since a ceasefire was established in the early 1990s, the conflict has largely remained frozen with the occasional exchange of small arms fire and minor skirmishes along the frontlines. The heavy fighting surpassed previous clashes in terms of scale and has since spread beyond the Line of Contact into major civilian urban areas such as Stepanakert.

While both sides have blamed each other for instigating the latest round of violence, it was Azeri troops who are on the offensive on at least three fronts. According to the President of Azerbaijan, Ilham Aliyev, the fighting will only cease once all pro-Armenian forces withdraw from the enclave and surrounding territories. Similarly, the Prime Minister of Armenia, Nikol Pashinyan, has also vowed to fight on as Azerbaijan’s terms were deemed unacceptable. Multilateral efforts to create new ceasefire conditions have met limited success. Neither party is likely to be pressured by international organizations, after years of stalled progress to find a negotiated settlement on Nagorno-Karabakh through conflict resolution mechanisms such as the OSCE Minsk Group. Apart from a decisive military victory, international observers generally consider direct Russian and Turkish influences as the main factor that will decide the outcome of this crisis.

From being relatively muted, the conflict now poses a persistent security risk for the South Caucasus region. While much of the fighting has been contained in the enclave, several missile and drone attacks have targeted Armenian and Azeri cities, causing civilian casualties. These attacks also exposed the vulnerability of strategic oil and gas pipelines that run near the contested territory. The movement also remains highly restricted on land and in the air as both countries have declared martial law in preparation for a wider conflict. Furthermore, the possibility of direct confrontation between Russian and Turkish-aligned forces is increasing daily. Having delayed its response, Moscow is now considering the implementation of the “Lavrov Plan”, a controversial conflict resolution initiative that would see Armenia withdrawing from occupied territory in exchange for the deployment of Russian peacekeepers. Mainstream media reports on the deployment of foreign mercenaries also marked an increasingly normal international trend of interference by external states using local proxy forces supported by a limited yet potent military footprint to secure interests in local conflicts. Should Ankara consider this operation a success, Turkish military diplomacy could also be emboldened to act more aggressively in other disputed areas such as in maritime waters around the Mediterranean Sea.

The breakdown of two ceasefires just days apart reflects the fragility the current status quo has become. Even as a new ceasefire is being inked out, offensives and counter-offensives are being conducted throughout the enclave. Continued instability has already demonstrated a security risk that encompasses the South Caucasus region. Other than more costly fighting, Armenia and Azerbaijan must find a compromise on the issue. In the past, frameworks such as the “Lavrov Plan” and “Kazan Formula” have been presented as not only respecting Azerbaijan’s territorial integrity but also the rights of ethnic Armenians in Nagorno-Karabakh. With the latest escalation, it is high time for constructive steps to be taken towards a peaceful settlement that prioritizes the interests of both parties.

After two months of street protests and strikes, the political crisis that was triggered by the controversial re-election of President Alexander Lukashenko looked set to drag on further. Protests continued to be an almost daily occurrence in Minsk and other major cities in October, while foreign pressure from the west, such as the sanctions by the European Union (EU) seemed to have a limited impact on Lukashenko’s hold to power. While the opposition groups held on to their goal of a regime change, Russia’s continuous backing of Lukashenko through various means, including placing the opposition leader on its wanted list in early October, could complicate the crisis further.

The “Festival of Lights,” also known as Diwali is among the most important celebrations in the Hindu calendar, and celebrations have always been grandeur in the second most-populated country in the world. Due to the Covid-19 pandemic, however, celebrations are expected to be significantly toned down this year with the country struggling to tame the spread of the virus that had killed almost 130,000 people, the third-highest globally. While the health minister struck an optimistic note in late August that the virus will be under control by Diwali, the number of new cases that remain stubbornly high might mean more restrictions are likely to prevent the epidemic from worsening. India entered the so-called “Unlock 5.0” in October that saw more establishments such as cinemas and swimming pools being allowed to reopen. The next stage of reopening will likely start in mid-November, with further details expected to be announced in the first two weeks.

As medical personnel is grappling to contain the deadly Covid-19 outbreak, other infectious and similarly lethal diseases like dengue have also experienced a dramatic spike in the past decade due to factors like unplanned urbanization and the rising global temperatures. The dengue epidemic continues to be reported in many parts of the world, including the Americas, Africa, Asia, the Middle East, and the Pacific Islands, with an estimated 390 million infections occurring each year. Brazil, for instance, is battling a dual crisis, with data in September showing over 5.24 million Covid-19 cases, alongside 1.3 million cases of dengue being recorded. In Asia, countries like Malaysia and Indonesia are also facing concurrent outbreaks of dengue despite targeted lockdowns that are aimed at slowing down the spread of Covid-19. Experts have estimated that an alarming rise in the number of mosquito-borne dengue cases is set to persist in the coming months, especially in countries that are already under the pressure of Covid-19.

Since early October, Nigeria has witnessed massive anti-police violence protests that have rocked various cities, including Abuja and Lagos. The protests gained momentum following the revitalization of the 2017 #ENDSARS campaign in which activists had demanded the notorious Special Anti-Robbery Squad (SARS) be disbanded. The force has previously been accused of kidnapping, murder, theft, rape, torture, unlawful arrests, humiliation, unlawful detention, extrajudicial killings, and extortion, among others. Although the government agreed to the protesters’ demand after days of demonstrations, some have welcomed the news with skepticism as it was reported that the plan was just to reassign and review SARS officers to medical centers rather than remove them entirely. What started as a movement against police violence eventually became a catalyst for bigger protests over bad governance and poor economic conditions as well as insecurity in the northeast. Disruptions from the protests were widespread, with roads being blocked while government buildings being torched. Not only that, but the government has also been accused of sending thugs to attack protesters, resulting in violent clashes between both sides. With no solution in sight, the protests are likely to carry on into November. International solidarity protests have also been held by the Nigerian diasporas abroad in cities such as London, Dublin, Ontario, and New York, among others.