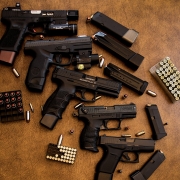 On 7 May, Brazil’s right-wing President Jair Bolsonaro signed a decree relaxing the rules for carrying firearms and raising a limit on ammunition purchases. This means that at least 20 million new people will be allowed to potentially carry firearms in the country, formerly restricted to the security forces.

The carry permit implies the authorization to hold a weapon at all times, including outside residential premises, and the renewed decree expands it to a range of twenty professions such as lawyers, elected politicians, prison officers, police reporters, truck drivers and residents of rural areas. Among the changes the decree also opens the country to guns and ammunition made outside of its territory and allows children to take artillery lessons.

According to the Public Federal Ministry, which has demanded the immediate and full suspension of the measure, it infringes the Statute of Disarmament sanctioned in 2003 and threatens the public security of all people. Prosecutors point out that since weapons are durable goods, the increase in its purchase will have a significant impact for decades as many firearms acquired before the Statue have been used in criminal activity up to this point.

President Bolsonaro, a retired military officer and a congressman representing the state of Rio de Janeiro for 27 years, has long taken part of the pro-gun lobby known as the “Bible, beef and bullets” caucus. In 2018 he made use of a militarized speech to get elected. But subject matter authorities have warned that easing regulatory constraints on carrying weapons would incite violence in a country that has long been the world leader in overall homicides, and which already has one of the highest murder rates in the world.  Consequently, the more weapons and ammunition available, the more it will end up in the hands of criminal gangs and the more the death toll is expected to escalate throughout the country.

In addition, airlines and government representatives are concerned about the decree as it also appears to give scope to the boarding of armed people in commercial passenger flights, which could lead foreign airlines to cancel flights in the country, increasing ticket prices.

Safeture will continue to monitor crime-related incidents in Brazil as well as the security policies of the newly elected far-right President Jair Bolsonaro.